The future of travel? (I want one)

called the transformer. This new model is called the TF-X and the company is Terrafugia.

” The first flying cars are set to go on sale to the public as early as 2015. Terrafugia has announced its Transition design, which is part sedan, part private jet with two seats, four wheels and wings that fold up so it can be driven like a car, will be on sale in less than two years. The Massachusetts-based firm has also unveiled plans for a TF-X model that will be small enough to fit in a garage, and won’t need a runway to take off. Would you buy one? “

I have been excited about the possibility of flying cars ever since I was a child and I really believed that they would become reality in my life time. I can remember speaking to a colleague in Australia about it back in the 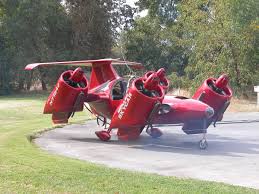 late 80’s. AT the time the car I was interested in was being designed by NASA and Moller. Unfortunately over 100 million was spent before the company filed for bankruptcy protection in 2009.

Computer and engine technology has come a long way since then so perhaps Terrafugia will be the first to successfully deliver on Dr. Paul Moller’s dream.

For a video describing the car and some background on the company, visit: http://www.youtube.com/watch?feature=player_embedded&v=SqmILVE7nPQ

Check out the video, I definitely want one of these…