The future of air travel?

This BLOG post was written while flying over Lake Winnipeg. It’s a clear day and the weather down there looks amazing. When Commander Hatfield was up on the space station earlier this year, I monitored his twitter posts for a while. I can’t imagine what that was like but this is good enough for me.

As we were climbing out of Ottawa we moved through clouds that looked like canyons in the sky. It made me wonder what it was like to fly in dirigibles. To move so slowly through canyons in the sky would be something to experience. To feel the wind and be able to walk outside and touch the clouds would be amazing.

This got me thinking about what ever happened to dirigible technology.

This airship is currently being designed in California. It combines both advances in computer systems and new materials technology.

This ship gets around several major drawbacks of traditional airships which had difficulty controlling lift, needed ballasts to reach the correct altitude, and ropes at docking stations to stop the vessels from floating off.

The “Aeroscraft” uses large bags, or bladders, inside a rigid structure. When the pilot wants to descend, the vehicle needs to be heavier, so the helium in the main body of the craft is compressed and put into storage chambers. That creates a relative vacuum inside the body, which draws air from the outside. Air is heavier than helium, so the vehicle sinks. To rise again, the stored helium is released back into the body of the aircraft, pushing the air out of the bags and replacing the volume it filled with lightweight helium.

For years the United States has maintained the National Helium Reserve, also known as the Federal Helium Reserve. It is a strategic reserve for the United States holding over 1 billion cubic meters (1E9 m3) of helium gas. The helium is stored at the Cliffside Storage Facility about 12 miles (19 km) northwest of Amarillo Texas in a natural geologic gas storage formation, the Bush Dome reservoir. Helium is a natural byproduct of the extraction of natural gas and there are many gas fields close to this site. Congress was considering privatizing the facility but then in 2013 reversed that decision. Perhaps they have already determined its increasing commercial value?

Oddly enough, one of the companies that started lighter than air flight is still around. Zeppelin corporation still manufacturers airships for customers like Goodyear, De Beers and many other wealthy clients. 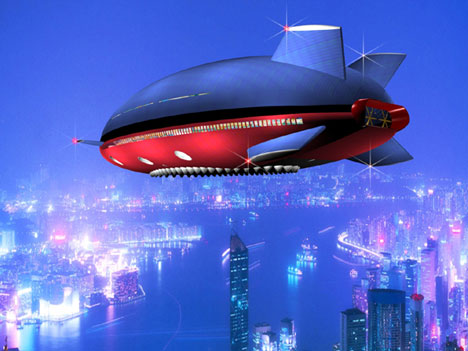 I suspect that we will see the return of high tech airships for vacation travel as well as industrial applications.

This picture shows an artists conception of airships of the future.

Travel will not be as fast as modern day jets, but it could be more cost effective and for tourists that are in no hurry, it does present many interesting possibilities.